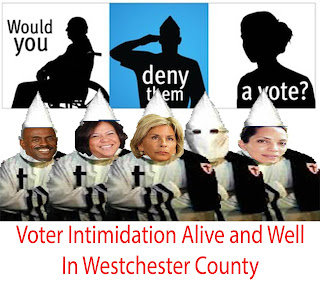 An incompetent group of racist individuals running candidates for public office have resorted to the racist tactics of the segregated south and have joined forces with another known racist; corrupt Westchester District Attorney Janet DiFiore.

New York State election law affords every person registered to vote the opportunity to challenge nominating petition if they feel that there is something there worth challenging.  Challenging petitions is normal and part of the process; however New York State election law is specific on how to bring about these challenges.
Concerned Property Owners led by John Gallagher filed challenges against all of their challengers for the upcoming Democratic Primary on September 10, 2013.  Seeing that the petitions filed by the Mount Vernon Democratic City Committee numbered in excess of 3,500 signatures, this cowardly group of racists, felt it would be easier to pick on and knock Damon K. Jones off the ballot.

Concerned Property Owners’ incompetence then began to show that the candidates they are running are not fit for public office.  They erred in their filing of objections against Damon K. Jones and did not serve Damon and the Board of Elections properly.

These racists then turned to the ultimate racist, Janet DiFiore for help.  John Gallagher and City Council candidate Maria Caraballo then filed a false report with Janet’s office and said that there was a conspiracy within the Westchester County Board of Elections.

Janet then dispatched a pack of her lapdogs to harass, intimidate, and suppress Mount Vernon voters.  These investigators are Edward Salinas and Investigator Hatch.  Both of these individuals have been caught on tape harassing voters and telling them they are under criminal investigation for carrying petitions. Damon Jones has been an outspoken critic of Janet DiFiore and has time and time again called for her resignation over how she handles blacks gunned down by her rogue white racist police officers.

Janet DiFiore is using her office as a bully pulpit in an attempt to scare voters from not going to the polls on September 10, 2013.

Maria Caraballo is unfit for public office.  She is a racist that and doesn’t care about the South Side residents in Mount Vernon.  Maria even went as far to say that “dogs” should be brought into the public schools to deal with unruly youth.

Just the other night at the city council debate, when Maria was asked about her plans for develop for the Third Street corridor; Maria responded “I don’t see any issue wrong with Third Street”.


Maria and her team of racist thugs must be stopped before they enact the racist agenda on the residents of Mount Vernon.
Posted by THE BLACK POLITICAL CAUCUS OF WESTCHESTER at 2:10 PM No comments:

A rogue group of City Council candidates claiming to be agents of change have been intentionally and willfully been trying to cause mass confusion and trying to disenfranchise City of Mount Vernon voters. These are the same rogue individuals from the North side of Mount Vernon that have taken over the school board with their divisive and racist tactics.
These individuals must be stopped because they are not working in the best interest of the public.  These individuals are Maria Caraballo, Andre Bailey, Damaris Mone’  and are being led by their puppet master, John Gallagher, a north side resident who many view as a racist with strong ties to the Tea Party.

These city council candidates are backed and funded by an organization led by Gallagher called Concerned Property Owners, a racist organization that violates NYS election law year after year.

Either Maria has trouble reading and understanding the English language or just doesn’t know about the Mount Vernon City Charter; however either excuse is unacceptable and a danger to the public welfare.

A criminal investigation is also under by Federal officials because of illegal campaign activities by Gallagher’s group, Concerned Property Owners; a sham organization seeks to divide city residents by spreading false and divisive propaganda throughout the City.

Concerned Property Owners has not filed the NYS required financial disclosure forms.  The public needs to know that Maria Caraballo and her loony cast of characters are receiving funds from Tea Party, the Aryan Brotherhood, and other various White Supremacist groups.  There are rumors that Concerned Property Owners are seeking to build an all-white high school at the former site of St. Peter’s and Paul School in Fleetwood, recently closed by the Roman Catholic Archdiocese.

Caraballo is also under investigation by the Mount Vernon Board of Ethics following several complaints  into her illegal political activities.

Caraballo has her cast of loony tunes have also been violating city ordinances and placing their large and unattractive campaign signs on public property which is in violation of the Mount Vernon City Charter.  Complaints have been made to the proper authorities and as such, the process has begun in removing these illegally placed campaign sign.  Is Maria Caraballo and her cast of racist loony tunes the type of people we want representing us on the city council?  To be continued.

Next issue---“Racist District Attorney Janet DiFiore and her corrupt investigators join forces with Concerned Property Owners”
Posted by THE BLACK POLITICAL CAUCUS OF WESTCHESTER at 5:33 PM No comments: