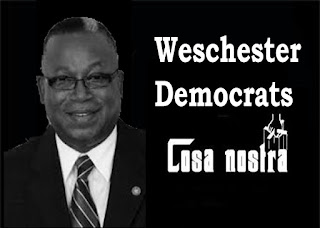 On Thursday, September 10, 2015 Democrats in the City of Mount Vernon overwhelmingly casted their vote and support for Richard Thomas for Mayor, Andre Wallace and Lisa Copeland for City Council, and Adrian Armstrong for City Court Judge.

The outcome of the Democratic Primary didn't sit well with the status quo as their power structure and the source of their income (corruption) is coming to a screeching halt.

Unable to show good sportsmanship and support the winner of the Democratic Primary, several bitter and angry Democrats are now trying to stage a coup thinking they are going to defeat Democratic Mayoral Nominee, Richard Thomas.

There is also another player hard at work trying to disrupt progress in the City of Mount Vernon.  Enter Lisa Copeland.  Lisa Copeland was a corrupt City Clerk who intentionally destroyed thousands of pages of documents when Federal Agents were probing Mayor Ernest Davis and Mount Vernon City Hall.

Reggie Lafayette must come clean at once and publicly call on Sen. Thompson, a Democrat, to abandon her campaign and to support the Democratic nominee, Richard Thomas.

One can assume that LaFayette is working behind the scenes to help Sen. Thompson because Lafayette still is not allowing Richard Thomas and Andre Wallace access to the Mount Vernon Democratic City headquarters even though they were victorious during the primary.

The political insider that members of the Young camp and Thompson camp were secretly meeting in Harlem last week on Frederick Douglas Blvd discussing their plan of attack against Richard Thomas.

Posted by THE BLACK POLITICAL CAUCUS OF WESTCHESTER at 12:14 PM No comments:

According to the insider, the crime bosses gave Reggie Lafayette $300K cash to pay people up to $100 each to vote for Ernie Davis for Mayor and Brandon Sall for Westchester Surrogate Judge.  The people that are being paid to vote are instructed to go to several sites in Mount Vernon where key people Reggie has put in place have already been advised of the plan to defraud the entire election process.  Reggie Lafayette has been running this racketeering scheme for years and during the previous Mayoral primary election in 2011.

Poll Watchers must be vigilant and challenge every vote cast at these sites.   Reggie has instructed that this scam be carried out during the day while most people are at work.  The insider said Reggie is always boasting and bragging about how they paid over 1,000 people to vote for Mayor Ernie Davis in the previous Mayoral election.

If poll watchers notice any fraud at the polling place, please take a picture of the suspect and contact the F.B.I. immediately.

Posted by THE BLACK POLITICAL CAUCUS OF WESTCHESTER at 9:27 AM No comments:

An insider from former Mayor Clinton Young's camp confirmed to Mount Vernon Exposed that the former Mayor and Sen. Ruth Hassell Thompson are only in the mayoral race to split the vote in hopes of keeping City Councilman and Mayoral candidate Richard Thomas from winning the primary.

Just how effective this shoddy plan is will soon come to light.  Voters must reject the former Mayor who was an absolute nightmare when he was in office.

A vote for Clinton Young is a vote for Mayor Ernie Davis.

Voters must not take the candidacy of Clinton Young serious.  Clinton Young is still a bad manager of finances.  As of today, Clinton Young owes $33, 748.62 in back taxes on the property he is registered to vote at, 80 Ellwood Avenue, Mount Vernon, NY 10552.

Clinton Young also lost a parcel of property to the City of New Rochelle because he didn't pay the $18,000 tax bill.

Voters must say NO to Clinton Young tomorrow. 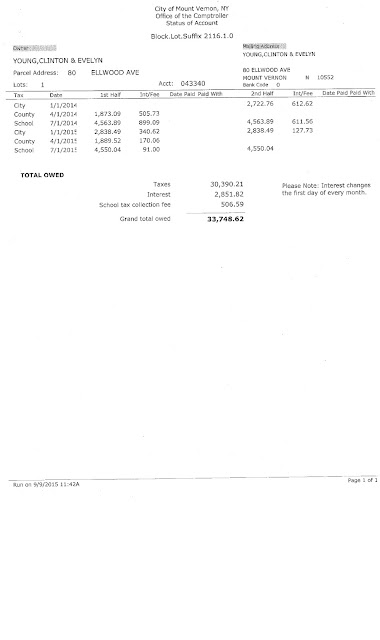 Posted by THE BLACK POLITICAL CAUCUS OF WESTCHESTER at 1:11 PM No comments:

A City Hall insider has informed Mount Vernon Exposed that Edward Stevenson Muhammad, Chief of the Mount Vernon Fire Department and Water Commissioner Anthony Bove  will be using their taxpayer funded, city issued vehicles to shuttle voters to and from the poles tomorrow during the Democratic Primary.

It has become quite obvious that Mayor Ernie Davis' campaign is on life support and as such, has resorted to desperate measures to try to win the election.  Voters must reject the thuggery that is being displayed on a daily basis from the Davis Camp.

The thuggish behavior was caught on tape by News 12 camera for the world to see.

Posted by THE BLACK POLITICAL CAUCUS OF WESTCHESTER at 9:29 AM No comments:

Helena R. Edwards, the wife of Mount Vernon City Court Judge, The Honorable William “Bill” Edwards Bill endorses Frank Streng for Surrogate Judge. While he Code of Ethics prevents any judge from endorsing or publicly declaring their support openly for a candidate, his wife, Helena has always been her own person and has never been shy to speaking her mind.

“I endorse Streng for judge because his decision to run against the Corrupt Democrat regime is an indication to me that he will be fair and wouldn’t be a proxy to corruption in the judiciary,” Mrs Edwards tells Black Westchester exclusively Monday morning. “Reggie Lafayette told me at the Democratic Headquarters, when my husband ran for judge and was endorsed by the party, that my husband was going to make 1 million dollars over a ten-year period and the Democratic Party was entitled to 10 percent of that money. Therefore, I am convinced that any candidate that Reggie Lafayette endorses is part of this corruption of paying for a seat on the bench and selling justice.”
The wife of the Judge Edwards then went on the tell BW, about a story Sam Zherka did in the Westchester Guardian on this years ago. She said that “Reggie denied it and I challenged him to a lie detector test that I volunteered to take too. He did not agree to it.”
We will reach out the Democratic Chairman to get a statement from him as well, but Mrs. Edward ends by saying she stands by her words and publicly challenges him again to a lie detector test to see who is lying here.
Frank Streng is running against Westchester Democratic endorsed Brandon Sall, who scored the coveted top line on the ballot for Westchester County Surrogate Judge in the Democratic primary, Thursday, September 10th. Sall, a politically connected Harrison attorney is also an interim appointment from Gov. Andrew Cuomo. Streng says the county Democratic Party has stacked the deck against him.
“But hey it was not supposed to be fair to me,” the Surrogate Judge underdog candidate tells BW, about Sall’s appointment. “It was supposed to control the outcome and prevent the voters from having a choice. It’s all part of a technique of bullying candidates who are not favored by the party bosses. It substituted a political insider’s preference for a public choice on the merits of the candidates. The Democratic primary can correct that.”
Streng has been seen in the Black Church circuit lately in Mount Vernon and his mobile billboard made it debut, Sunday afternoon in the Food Bazaar parking lot behind the stage at Arts On Third. It’s only fair to mention Sall also made an appearance with Chairman Lafayette, at Arts On Third as well.
The underdog is making the rounds and is believed to be gaining some momentum as of late. He received an endorsement from national black police fraternal organization, Blacks In Law Enforcement of America, Friday morning and now the wife of Judge Edwards is publicly declaring her support on Monday. 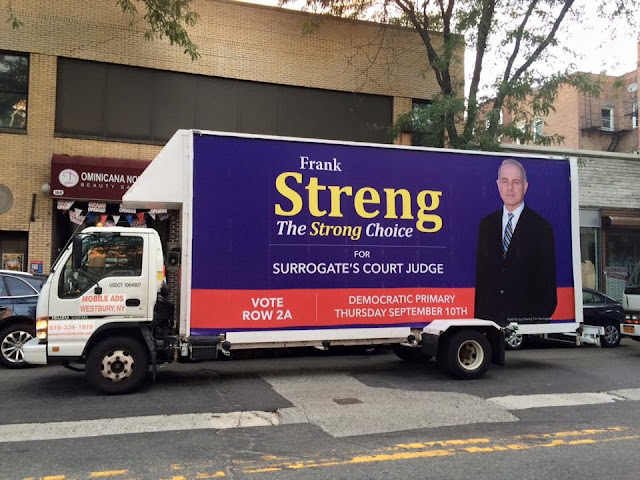 Posted by THE BLACK POLITICAL CAUCUS OF WESTCHESTER at 1:47 PM No comments: