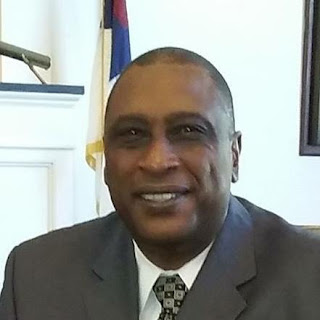 Community members are outraged that a so-called member of the clergy  would stoop so low as to attack a School Board Trustee in front of a live audience at the School Board meeting held on Tuesday, September 19, 2017.

Sources say the United Black Clergy Mafia is upset that they couldn’t strong-arm and extort School Board Trustee Lesly Zamor into giving the United Black Clergy Mafia contracts for the $108M bond recently voted on by City of Mount Vernon taxpayers. In the exchange for this quid pro quo arrangement, Alicia McDowell, wife of former School Board Trustee Omar McDowell, was able to keep her job as a parent liaison. The Bible teaches us in Mark 6:24 No man can serve two masters: for either he, will hate the one, and love the other; or else, he will hold to the one, and despise the other. Ye cannot serve God and mammon.

Sources have told Mount Vernon Exposed that United Black Clergy President Troy DeCohen continues to align himself with criminal and former School Board Trustee Omar McDowell.  McDowell was arrested and charged after he was captured on video after he violently assaulted Community Activist Samuel L. Rivers.  UBC President Troy DeCohen has even given McDowell a more prominent role in the UBC.   This is the new Mount Vernon.

Henry May’s connections, helped secure a no questions asked $75,000 job for his daughter, Donna Jackson. Jackson would be ushered in to serve as  Superintendent of School Ken Hamilton’s executive assistant.   Mount Vernon Exposed began an investigation into Donna Jackson after receiving several complaints that Jackson was hired illegally and not in accordance with New York State Civil Service protocols.

Mount Vernon Exposed requested Ms. Jackson’s resume under the Freedom of Information Law, but the district refuses to release it. For some strange reason Alice Patterson, the records access officer for the Mount Vernon City School District refuse not to not release Ms. Jackson’s resume and job application.  Not releasing this public information is in violation of New York State law.  Taxpayers will once again be left holding the bag due to the negligence of the United Black Clergy regime.

The political patronage position awarded Ms. Donna Jackson was never posted and no civil service exam was ever called for.  No other applicants were interviewed. Former School Board Trustee Elias Goodzeit who has strong ties to church officials, gave Donna Jackson a personal reference on her resume, which is inappropriate and an outright conflict of interest. Federal investigation need to look into the Gootzeit-Mays-Jackson connection to see if any monetary consideration was given or promised to Mr. Gootzeit for his kind gesture of providing Ms. Jackson with a personal reference.  Investigators should also look at all tabs and resolutions voted on by Gootzeit that had anything whatsoever to do with Judith Johnson and Donna Jackson.  Sources have told Mount Vernon Exposed that because Mr. Mays is a member of Grace Baptist Church, the headquarters of CEPA, is the reason his unqualified and inept daughter received her current job.

Formers Schools Chief  Judith Johnson informed the district that Donna Jackson would write grants.  As of today, no grants were written by Ms. Jackson. Sources informed Mount Vernon Exposed that Donna Jackson has no idea how to write a grant, and the grant writing claim was only fabricated, to justify her employment and illegally circumventing New York State civil service requirements.

As you can see, the dots are connecting. The United Black Clergy and City Hall has too much influence in The Mount Vernon School system. Jobs, contracts, and kickbacks are the main goal of these groups. The test scores of Mount Vernon children are horrendous, and these groups are to blame.

A school system is put in place to educate children. Mount Vernon’s school district has failed them miserably, and has become a cesspool full of greedy people stealing from children and taxpayers.Mount Vernon Exposed challenges any Community Activist, Henry May, and members of the UBC, to explain how student performances have fell so far behind, almost to the point of no return and why property taxes have skyrocketed to the highest in the nation under their leadership.
.
Unfortunately, we have different types of Black Politicians, Church leaders, and Community Activists than we had 40 years ago. Our leaders in the past really cared about our community, and did not exploit those who were vulnerable.  The churches and City Hall should immediately remove themselves from the stranglehold they have on our school district. They should apologize for damaging the lives of so many of our youth. They should compensate the tens of thousands of people who were cheated out of an education. They should repay the taxpayers who funded this fraud. They should also buy back the homes of grandmothers and others who were kicked to the curb because they could not pay their taxes.


To Be Continued ......#mvready
Posted by THE BLACK POLITICAL CAUCUS OF WESTCHESTER at 8:45 AM No comments: